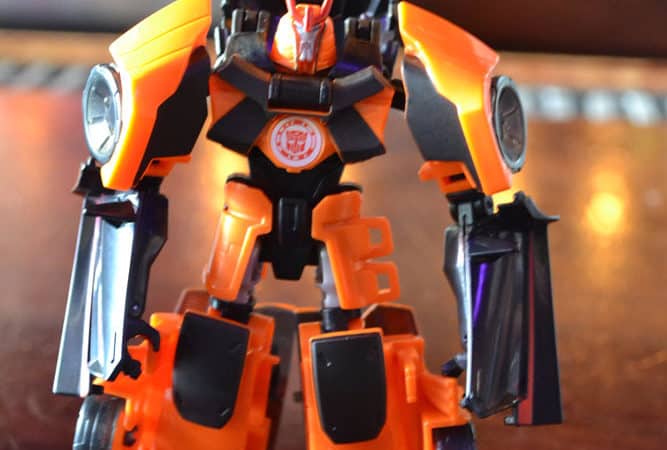 Recently we were invited to attend a “sneak peek” of TRANSFORMERS: Robots in Disguise, the All-New Animated Series from Hasbro Studios. We traveled down to New York City and participated in a special event complete with a screening of this new Transformers animated series that will be on The Cartoon Network. Cartoon Network will unleash TRANSFORMERS: Robots in Disguise on Saturday, March 14 at 6 p.m. (ET/PT) with a special one-hour premiere event. With new episodes that can be seen every Saturday starting on March 21st at 6:30 a.m. ET/PT. I promise you, this is one new series that ALL of the kids in your family will enjoy. My 13 year old was as enthralled as my two-year old little girl. The new series begins as Bumblebee must step up to be a leader in the years after we left the Autobots in Transformers Prime.He is summoned  by Optimus Prime to save Earth from a new Decepticon threat. Bumblebee (ever playing the comedian) must balance his job fighting off evil with being equal parts squad leader and coach to a rascally band that needs constant coaxing to learn how to work together. The results are comical when the cool rebel Sideswipe (very sarcastic), elite guard cadet Strongarm (a lady Transformer), bombastic dinobot Grimlock and overly-excited mini-con Fixit. As with all new animated series, there are a bevy of new toys to complete your child’s play experience.  They are: Most of these toys will be available for purchase in the Fall of 2015 in major retailers nationwide. You will n to be able to decide between them! My personal favorite is the 1-Step Changer. It is easy enough for even the smallest hands to change these Transformers all by themselves which definitely cuts down on the melt-downs!

While you are waiting for the toys to be introduced in the stores, don’t forget to tune into the TRANSFORMERS: Robots in Disguise animated feature on Cartoon Network. I know we sure will.